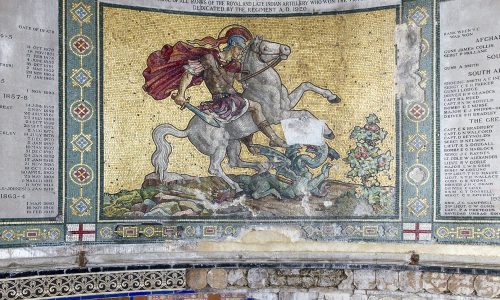 Specially commissioned security gates which commemorate the history of the Royal Artillery and the Royal Borough of Greenwich were unveiled by HRH The Duke of Gloucester at a Service of Dedication at the Royal Garrison Church of St. George on 11April 2018.

These gates stand at the west end of the Church and replace the solid wooden gates which prevented passers-by seeing into this unique and historic building. The design and creation of these gates was made possible by a substantial grant from the LIBOR Fund, with additional funding from the Royal Borough of Greenwich. After a competition, the commission was given to architect Peter Preston of Manifest, Oxford. The design of the gates incorporates the Crimean era cannon from the Royal Artillery Cap Badge in the lower section with the flowers of remembrance of Britain (the poppy), France (the corn flower) and Germany (the forget-me-not) intertwined above. At the top of the gates are gilded larks, evoking the famous lines from the poem ‘In Flanders Fields’,

Scarce heard among the guns below.”

The gates are painted dark blue (which would have been the appropriate colour at the time that the Church was built) and were made by father and son team Charles and William Normandale, renowned artists blacksmiths from Hampshire, but with contributions from the Farriers Department of The King’s Troop Royal Horse Artillery, based in Woolwich. The whole commission was delivered jointly by Heritage of London Trust Operations, Woolwich Garrison Church Trust and the Royal Borough of Greenwich

The event was attended by Earl Howe from the Ministry of Defence and the French and German Military Attachés. The Master Gunner St James’s Park, Lt Gen Sir Andrew Gregory, Colonel Vere Nichol (RA Regimental Secretary) and the Commanding Officers of two of the three military units comprising the Woolwich Station , Lt Col Cross( Royal Artillery) and Lt Col Moxey ( Royal Anglians)  all contributed to the Order of Service.

To find out more about the project to save the fabric of St George’s, see our project page.